Nearly 84% of Québec elementary school students living below the poverty line and in the worst poverty live in Montreal.

Socioeconomic data are key resources that guide the work of Montreal Hooked on School in targeted areas. Given the importance of poverty level as a risk factor that is likely to hinder school perseverance, this section paints a portrait of the situation, thanks to expertise from MHS’s Montreal partners.

Of all Montreal issues, poverty is considered the most worrisome because of its scope and its effect on the school perseverance of youth.

Poverty is defined as the social or material disadvantage experienced by a person or a group. This condition translates primarily as:

The situation in Montreal

Montreal at a disadvantage

According to the 2011 National Household Survey, among the three major metropolitan census areas in Canada, Montreal has the highest proportion of underprivileged neighbourhoods:

The 2006 Canadian Census showed that 24% of families in Montreal with children under the age of 18 live below the after-tax low-income cut-off, compared with 8% of families in the rest of Québec.

In total, according to calculations by the ministère de l’Éducation et de l’Enseignement supérieur in 2008, nearly 84% of Québec elementary school students living below the poverty line and in the worst poverty live in Montreal.

Montreal’s school tax commission (Comité de gestion de la taxe scolaire de l’île de Montréal) also shows that Montreal has a higher proportion of the most impoverished families in terms of income than Québec as a whole, and that the gap has widened in recent years:

In many neighbourhoods on the Island of Montreal, families live in very high poverty levels. Of a total of 486 zones, there are:

Each of these zones includes, on average, 459 families with children under the age of 18. 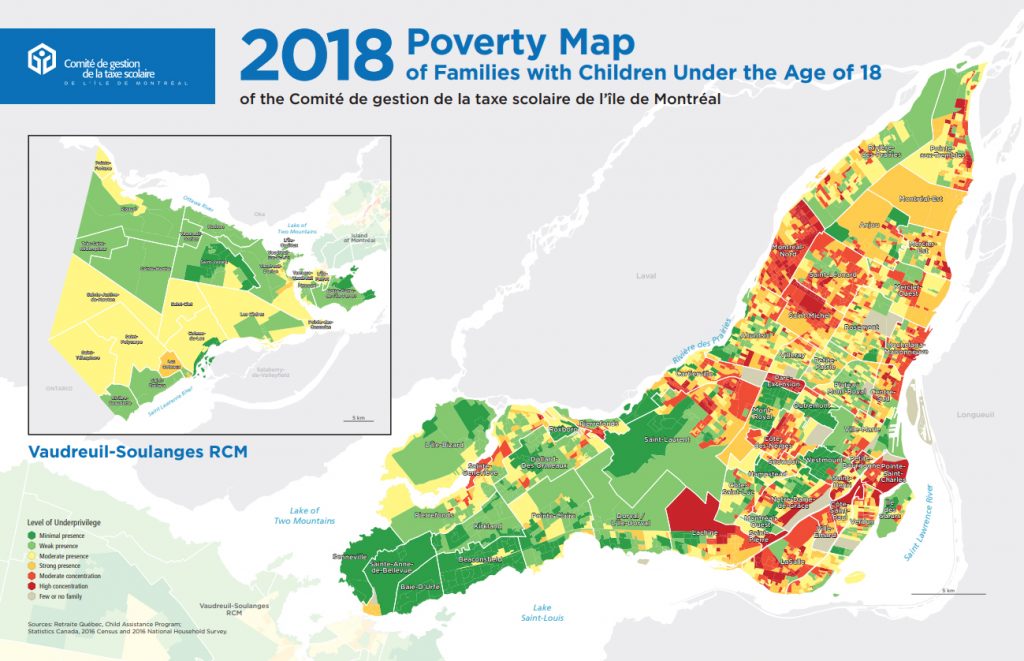 It is also important to note that between 2011 and 2016, the level of deprivation has worsened in Pointe-aux-Trembles, Pierrefonds, Dollard-Des Ormeaux, Ville-Marie, Côte-des-neiges and Sainte-Geneviève. However, the situation has improved in Verdun, La Petite-Patrie, Villeray and Le Plateau-Mont-Royal.

The effects of poverty on school perseverance and success

A number of studies show that youth living in underprivileged neighbourhoods may show:

A higher risk of dropping out of school

Youth living in underprivileged areas are more likely to have trouble at school. Many studies have shown that young dropouts are up to twice as numerous in poor neighbourhoods.

The 2012 Québec Survey of Child Development in Kindergarten showed that children living in underprivileged neighbourhoods are more likely to be vulnerable in at least one developmental domain. This means that they enter school with less preparation.

It is important to stress that such children are not predisposed to failure; rather, they are less equipped to learn in certain disciplines and to benefit from what the school has to offer.  The program Une école montréalaise pour tous points out that vulnerability is assessed based on expectations of the educational environment; in other words, the life experience of so-called vulnerable children differs from those expected by the school.

Other studies indicate that youth from underprivileged neighbourhoods believe they are less capable of succeeding or think they have no control over the conditions that lead to success.

A greater risk of adaptation or learning disabilities

The cycle of inequality

In communities with high levels of poverty, social and material disadvantage can become a vicious cycle that keeps people powerless and prevents them from fully participating as citizens in society.

Through their actions, community stakeholders can help mitigate the effects of poverty in order to break the cycle of inequality.

Education level of mothers, and single-parent families led by women

It is important to point out that two of the indicators used to calculate poverty levels are also major determinants of educational success among children: education level of mothers, and single-parent families led by women.

In light of the research and statistics, it should be pointed out that the characteristics of poverty are not inherent, and that poor children are not destined to failure.

Children from poor neighbourhoods have specific needs, and this means that schools and communities must adapt their responses to meet these needs.

Education helps to mitigate the effects of poverty and reduce social and academic inequalities. It is thus important to mobilize the entire community around schools in order to break the cycle of inequality.

Other courses of action

The fact sheets produced by Réunir Réussir on neighbourhood of residence  and community resources also offer courses of action to reduce the effects of poverty.

Many organizations and programs have produced tools and documentation that can guide action related to poverty: