Dropping out of school

Definition of dropping out

Students do not drop out of school overnight. Dropping out is a complex and multifaceted phenomenon. Throughout their schooling, youth are constantly influenced by various factors called “determinants of school perseverance“. When these factors have a negative influence, they are called risk factors. Risk factors increase the likelihood that a student will struggle at school, which can lead to dropping out. Determinants of school perseverance include motivation and engagement, self-esteem, parental supervision, school climate, and community resources.

Dropout indicator: rate of students leaving school without a diploma or qualification

To quantify the dropout rate in Québec, the ministère de l’Éducation calculates the rate of school leavers, among students enrolled in youth-sector general education in a given year, who leave without a diploma or qualification. The rate is calculated annually.

A dropout, also called an “early school leaver,” is a student who was enrolled in Secondary 1 to 5 of Québec’s youth-sector general education program as of September 30 of a given year but who cannot be found in any general education youth-sector teaching establishment, adult-sector program, or vocational program in Québec during a follow-up almost two years later.

For further details and information on the dropout rate, please visit the government’s website. (French only)

For several years, the dropout rate has been declining in Montreal. At 24.6% in 2009, it dropped to 18.3% in 2019. Taking a closer look at Montreal’s specific context helps to better understand these figures.

Dropping out: costs and consequences

The consequences of dropping out, by the numbers

An update to the costs of dropping out paints a portrait of the significant social and economic consequences of leaving school for both the individual and society as a whole.

Dropping out has considerable repercussions on both the person who drops out and the community as a whole. According to the 2019 study Persévérance scolaire et conciliation études-travail : une piste de solution à la pénurie de main-d’œuvre, “…students dropping out of Montréal’s public school system in the 2019–2020 school year alone will earn $261.7 million less over the course of their working lives. For the government, this represents $72.0 million in lost tax revenues from secondary 5 dropouts in these school boards. The impact on Montréal’s economy is nearly $600 million.”

Higher numbers of unemployed
30% of dropouts do not join the workforce.

*Costs calculated for the entire working lives of dropouts projected for 2019–2020 in the 5 school boards on the Island of Montreal.

Dropouts…
– Are more likely to suffer from health problems.
– Have a lower life expectancy.

62% of people who pass through the prison system are dropouts.
Each inmate costs $251 per day.

Between the better and less well-off
A dropout’s average employment income is 31% lower than that of a high school graduate.

The costs of not graduating are even higher for Montreal dropouts. 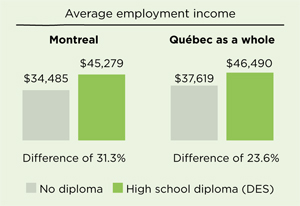 Between men and women
Female dropouts are more severely affected by insecurity and poverty:

Dropouts, who are they?

Re-engaging with school is an important factor in Québec’s graduation rate. The Youth in Transition Survey estimates that 65% of the young people who leave school without a diploma eventually return to finish high school.

The labour shortage can jeopardize efforts to return to school

The increasingly observed decline in enrollment in general adult education and vocational training may be due to the current labour shortage, which makes it easier to find well-paying jobs that require little or no qualification.

It is likely that easier access to the job market turns young people who would otherwise have eventually returned to school into permanent dropouts.

The costs of reduced re-engagement with school

It is estimated that a 20% reduction in re-engagement with school will considerably increase the costs associated with dropping out in Montreal, bringing the amount of lost income for dropouts to $350 million and the tax revenue shortfall for the government to $92.8 million.