Montreal has a number of distinctive features that set it apart from Québec as a whole and that affect actions to promote school perseverance.

Young Montrealers drop out of school more than students in the rest of the province.

While the graduation rate has improved in recent years, the situation in Montreal is still of concern.

This is why efforts to ensure that more student graduate from high school must be intensified and adapted to students at risk of dropping out.

The high number of students in Montreal means that behind the dropout rate is a considerable number, in real terms, of young people who do not graduate.

Meaning that 21% of all Québec dropouts are in Montreal.

This represents a significant number of young people who need special support to earn an initial diploma.

Overview of the population and student numbers 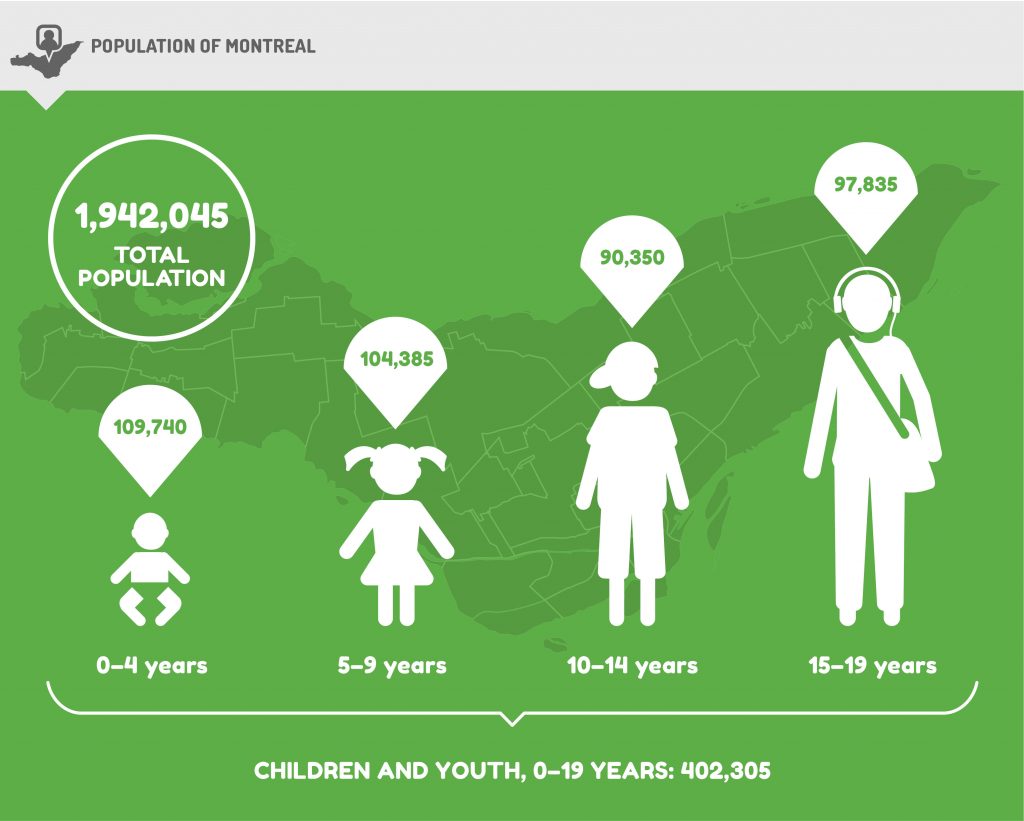 Among all Montreal issues, poverty is considered the most pressing because of its scope and its effect on school perseverance.

Given that students from underprivileged environments are at greater risk of having trouble at school and of dropping out, it is important to mobilize communities around schools to break the cycle of inequality.

Many students with immigrant backgrounds

The proportion of students with immigrant backgrounds in Montreal’s schools has been rising constantly in recent years. At 45.5% in 1998, it reached 67.3% in 2019. In some neighbourhoods, immigrant students can represent over 70% of the school population.

The high levels of immigration to Montreal thus make Montreal’s school system the primary venue for integrating new arrivals from a diversity of cultures into Québec society.

This represents a significant challenge, one that encompasses several issues that affect students’ school experience. It is thus vital to consider these issues when planning actions.

Indeed, calculating the graduation rate after 7 years of secondary schooling (rather than 5) has taken on such importance in Montreal partly in response to meeting the specific needs of these youth, who may need additional time to obtain a high school diploma.

For more information on this issue, Montreal Hooked on School has prepared a Key Topic page on students with immigrant backgrounds.

While the situation in some neighbourhoods may seem of little concern at first glance, a closer examination can reveal sub-territories with risk factors that can hinder the school perseverance and success of young people.

Below are several examples of Montreal neighbourhoods where it is important to closely examine local realities in order to properly target interventions.

It is important to look closely at certain data to prioritize and target intervention zones within these neighbourhoods to reach the most vulnerable populations.

For instance, in Pierrefonds only 4% of the population lives in the most unfavourable material and social conditions (compared with 16.3% for Montreal). However, in the Sainte-Geneviève and Cloverdale–À-Ma-Baie sectors, this rate is 33% and 18% respectively.

In population-dense areas, a low percentage can hide a large number of families

This is why, when analyzing a neighbourhood’s statistics, it is sometimes useful to focus on real numbers rather than percentages.

For example, more families live below the poverty line in Saint-Léonard than in Hochelaga-Maisonneuve (2,175 versus 1,625), despite their respective percentages of 26% and 37%. Even though poverty in Saint-Léonard is less concentrated, the neighbourhood is home to many families who are in considerable need of support.

In addition to population density, it is also important to consider the effects of concentration and environment. High concentrations of people experiencing the same issues can often increase and even perpetuate the risk of individual vulnerability. By the same token, the effects of living environment can influence youth development and reduce the models to which youth are exposed.

Socio-economic condition is not the only factor to consider when targeting sectors for priority intervention. So the factors that influence school perseverance in each area must be clearly determined in order to adapt any interventions.

For example, the socio-economic situation of families in Pointe-aux-Trembles is about average for Montreal. However, the dropout rate among high school students in this area stand between 12,4 and 28,8%. Looking at other factors reveals that parents in the area have a low rate of high school graduation, and 1 in 7 mothers has no diploma, certificate, or degree.

Thus, unlike some other neighbourhoods, where poverty is the primary risk factor, one of the main issues in Pointe-aux-Trembles is the value placed on education.

The presence of significant local disparities therefore justifies an approach and interventions that are adapted to specific local needs. In addition, the willingness and ability to act across organizational lines must be considered from a different angle, without being neglected entirely.

Family isolation is a significant issue, since it can prevent children from reaching their full potential.

Isolated families are families with young children who, for cultural, socioeconomic, or accessibility reasons, have trouble accessing the services they need.

It is essential to develop targeted strategies to reach such families, create connections with them, and encourage them to use available services or resources, in particular to:

To encourage sharing of best practices, Horizon 0-5 has gathered strategies implemented on the Island of Montreal to reach isolated families.

Montreal has a considerable number of stakeholders working in various capacities to promote school perseverance:

Given the complex nature of school perseverance, pooling the expertise of all these stakeholders is an essential part of increasing Montreal’s graduation rate.

However, the sheer number of partners involved means that considerable coordination is required to ensure that actions are carried out jointly and that they meet the specific needs of children in each community.