Commissioned by the Chamber of Commerce of Metropolitan Montreal and Réseau réussite Montréal, in partnership with the Regroupement des cégeps de Montréal.

Declining enrollment in vocational training, adult general education, and among adults at CEGEP

Signs point to a decline in graduation rates due to the appeal of jobs during a period of labour shortages. 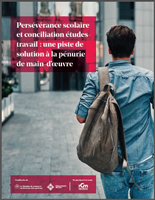 Dropping out of school has significant consequences for both the individual and society.

Which makes the findings of this study all the more worrisome. Certain signs point to possible increases in the dropout rate and of unfinished CEGEP diplomas. The cause? Current economic conditions make it very easy to get a job requiring little or no qualifications.

But in the coming years, the number of low-skilled jobs will decline in favour of more highly qualified positions, meaning that young people who leave school or fail to complete later stages of their education will be in a weaker position. By neglecting their education to fill a low-skill job, they may lack the capacity to transition to a more highly qualified position if their job is later eliminated.

One way to encourage young people to graduate, which benefits all of society, is to foster the development of models that allow young people to have jobs while still focusing on their education.

Read the study   (French only)

Read the highlights (French only)